I'm slowly realizing that my April vacation is drifting away from us. Other than the plantar fasciitis issues, it has been a great week. (Thank God for kinesio tape by the way. I feel so much better and it has allowed me to stretch more comfortably and not be in constant pain. I hope when I take it off tomorrow, I'm still feeling okay.) Today was full of adventure.
We started our morning at the Shrine Circus.  It is a smaller circus than the ones that are at the big venues in Boston but 1) it's more local, 2) it benefits a good cause. There were all kinds of different acts and the boys had fun.

After the circus, we came home for lunch. Tim played Minecraft with a friend from WI and David went to play with a friend for a few hours. When we picked him up, we stayed and talked to the family for another few hours.
Then, we ended the night at a benefit basketball game. We were given tickets by Matt's boss. It was some of our police officers playing against some of the New England Patriots (and former Patriots). Some of the players that were there were LeGarrette Blount, Ryan Allen, Brandon King, Jermaine Wiggins, Patrick Pass, Ross Ventrone, and Steve DeOssie. They all seemed like really nice guys. Everybody had a nice time. Lots of laughs. I should also mention that I usually don't like basketball. It's a little slow for me. This game was kind of slow too but it was still fun.
1 more day of vacation.

If you are a person who chats with me often (or follows the blog), you probably know that my February is usually spent writing tons of letters, March- making a bunch of music with various groups and April is a bit of a break before my end of the year concerts make me super busy. Currently I'm on the tail end of April school vacation I have a bit of time before a dentist appointment so I thought I would use that time to say hello! Here's what has been going on with me.  I'll start with my mail related stuff since most of the people who read this, I've connected with through my 366 Project, penpalling or Postcrossing.

Can you believe that, for the first time in... forever, that I actually got to a point where every single letter that needed a response was answered? I have never really had no "reply" pile. Lately the mail has started coming in again and I have this pile to respond to. 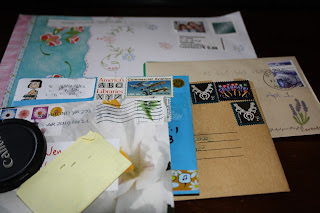 Marilyn, your letter is on the way. Then there is a letter from Ashley in Wi, Cathey in TX, Sue in Australia and Marianne in The Netherlands. Ambitiously, I'm trying to answer all of these this week/ weekend.
I have also gotten some cool postcards lately. They are from Russia, US (from my friend Jessie), China, US, Taiwan. Germany and The Netherlands : 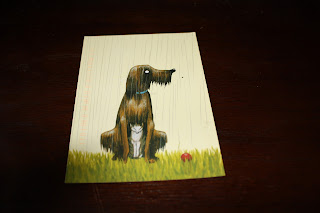 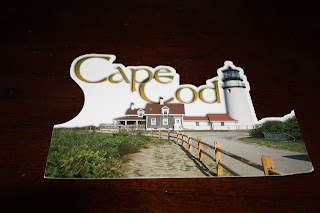 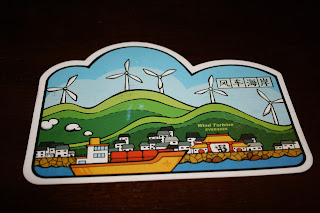 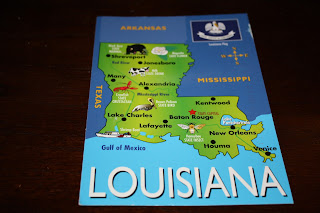 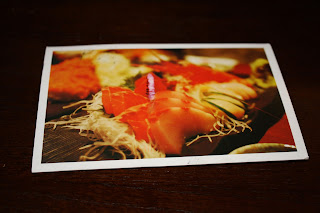 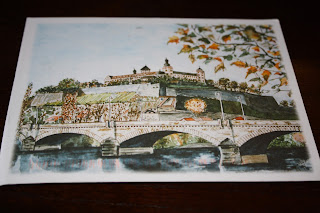 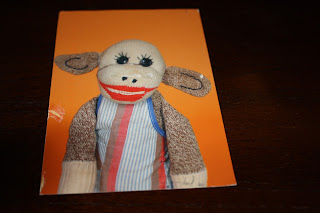 This little card came for Timmy and I had to show it to you. It's a watercolor card that was painted by the Postcrosser who sent it to him. I kind of want to steal it! Ha ha. Very cute! 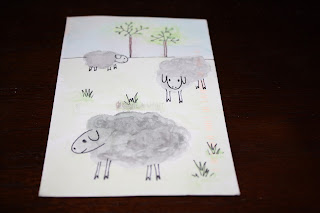 Work has been busy, as always. It has been a mix of super rewarding and super aggravating. At the beginning of the month, my students performed in the Junior District Festival.  (If you want to know more about the festival, I have written about them in previous blog posts.) Since my schedule is insane, I have been eating my lunch with the students who were preparing for the festival everyday for about 2 months. It was slightly stressful to not have any free time during the day, but I enjoyed this chance to work with 6 of them on a more individual level. I was very proud of them all. They all grew a lot musically over the past few months. I also really enjoyed getting to know them all a little better, though some of them feel like additional children to me by this point. I was also managing the boys choir at this festival. All of the boys were great. It was a great experience for me (again!).
Boys Chorus: 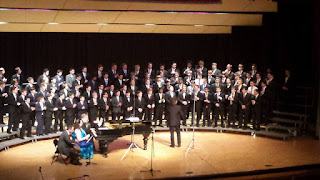 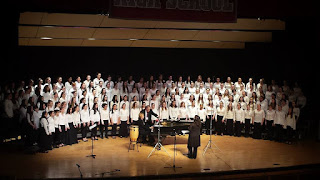 Flowers my students gave me (Rather, flowers 1 family gave me and were gracious enough to say they were from everybody! Unnecessary, but appreciated): 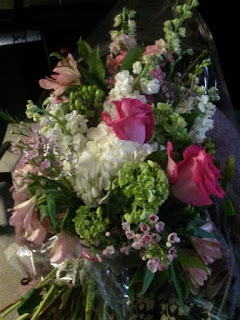 Then, the next week, our school put on the musical Peter Pan. Honestly, this cast was not the easiest to work with so at times it was very stressful. With that being said, the students were great and very talented, just a lot of drama with some of the older students and some people who were not as cooperative, no- just people who didn't think other people were as important as they were, as others. I'm glad it's over. I was happy with the performances of most of the students and I was also proud of a woman who stepped up as the new drama director for the first time this year. (I am the music director for the show) I also got some pretty flowers from "the cast." (Aka.. best friend of the girl who gave me the flowers the week before and 2 other families. ha ha.) 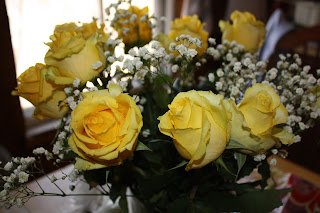 One thing I have really valued over the past few weeks is the connection that I have with many of my students. I appreciate that they are willing to be vulnerable and try all the things I ask them to, despite the fact that their voice "can't do that," or so they think. I feel honored that many of their families respect me and get to know me. I am glad I have a place of influence with many of these kids in a time when they need it.

There have been lots of changes here too. Matt's job has changed a bit. He used to manage a candy store during the nights and weekends. He had been asked if he would have interest apprenticing to be a candy maker a while ago. He was very interested. Unfortunately, the man he was learning from died unexpectedly. Matt has taken on the responsibility of this new position during their busiest season, right before Easter. Fortunately for us, he loves it and it has changed his schedule so that he is home more at night and on the weekends. It has been quite the adjustment but it's pretty cool. (Not to mention, chocolate!!!)
The boys are good. They are both doing very well in school. Baseball season is starting up. David had his first practice last night and Timmy has his first scrimmage tonight. We took a few nights and went to my parents' house in Maine. On the way up we stopped on the beach and looked at some tidepools in York, Maine. The next day we went to visit my cousin, Tom, in New Hampshire. We had not seen his family in a few years so we were really happy that they were around. I hope we get together more often. Other than that, we just relaxed and spent a lot of time hanging out and reading.
Speaking of relaxing, today is the nicest day of the year so far. It's 73 here in Ma. Matt is working. The boys and I decided to go for a walk on our local rail trail. We went to a playground and then walked about 2 miles. I love the rail trail in the fall and was surprised that it looked a little less alive in the spring. (I think I was expecting more green!) Beautiful day though!
Playground 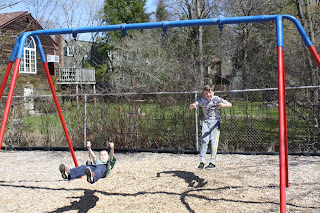 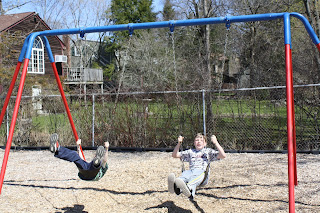 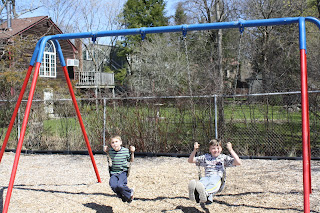 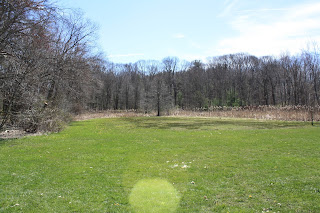 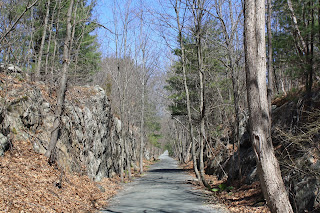 We heard some rustling and found this little pile of squirmy snakes. Ashley, I don't know why, but this made me think of you. Perhaps it was all the rattlesnake talk last year. 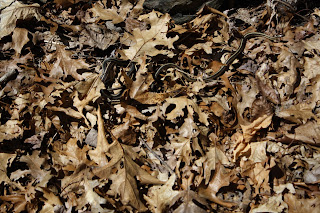 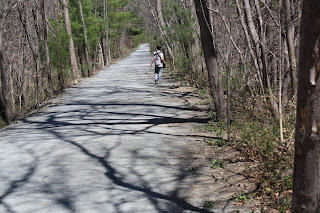 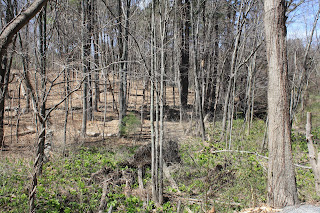 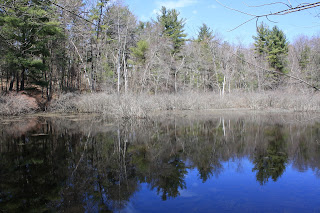 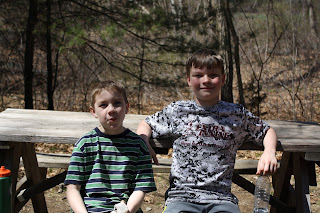 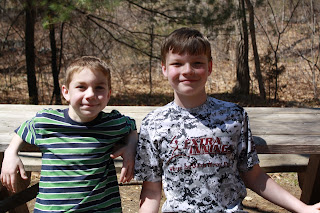 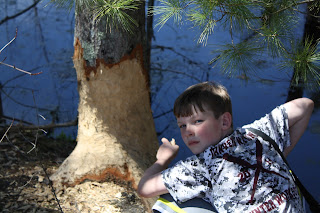 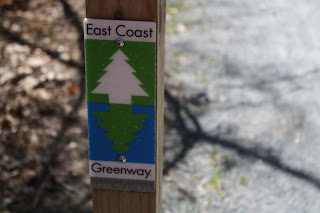 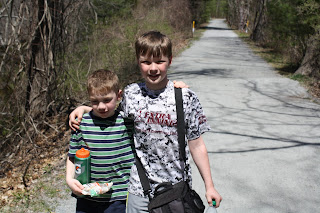 In other very unfortunate news, I think that my plantar fasciitis is coming back in both feet. I have been in excruciating pain for a few days despite stretching. I'm icing my feet like crazy in hopes that I won't pay for exercising tonight. I have a massage scheduled for tomorrow so maybe that will help.

The next few weeks are pretty tame but things will get busy soon. As I mentioned earlier, Timmy has his first scrimmage tonight. I'm looking forward to getting to know his new team.  He is really enjoying playing with them so far.
I have a concert to play for on 4/30 and then 2 graduations to play in. I'm conducting 3 concerts between now and the end of the school year.
We are also considering going to Canada for a vacation this summer. We're trying to decide between visiting Quebec or Nova Scotia? If you have been to Canada, or live there, we would be glad to get some recommendations about where we should stay or what we should try to do. Where are some of your favorite places?